Contact plates. A high percentage of today's commercial printing plates are made photographically using either negative or positive film. These plates are coated with a light-sensitive material that changes its solubility when exposed to light in a contact frame. The contact frame is a device that holds the film and plate together in firm contact under vacuum pressure. A light source that is appropriate for exposing the plate is activated with a timer or light meter for an exacting exposure. Negative-working plates are exposed with high-contrast film with the images in negative form. Positive-working plates are exposed with films in a positive format. In either case, the light that penetrates the transparent areas changes the solubility of the plate coating. After exposure, the plate is developed or processed to remove the coating from nonimage areas.

Negative-working contact plates are the most popular. They have soluble coatings that become insoluble upon exposure to light. The image (clear) areas of the negative allow light to penetrate and form the image areas of the plate. The unexposed coating (in the nonimage areas) remains soluble and is removed during development. See Fig. 2-24.

Surface plates. Whether negative or positive, there are tow general categories of contact plates: (1)surface and (2) multimetal. Surface plates may be either presensitized or wipe-on. Wipe-on plates are still sometimes used in the newspaper industry but are becoming more rare in recent years. Presensitized plates are coated with a sensitizing agent by the manufacturer; wipe-on plates are coated by the platemaker before imaging the plates. A surface plate after processing is shown in Fig. 2-25.

Bimetal plates consist of a base metal, usually aluminum or stainless steel, on which a thin layer of copper has been electroplated. Copper, which is naturally oleophilic, forms the ink-receptive image areas and is removed from nonimage areas. The bare base metal, the nonimage area, is easily desensitized to become water-receptive. Bimetal plates are supplied in smooth and grained form.

A special type of bimetal plate is made by electroplating a thin layer of chromium over a base metal of copper or brass. The chromium is etched away during processing, exposing the base metal in the image areas. Chromium remains on the plate in the nonimage areas.

Trimetal plates are made by electroplating two metals on a third base metal. The base metal is usually aluminum, mild steel, or stainless steel. A layer of copper is first electrodeposited on the base metal, followed by a thin layer of chromium. Chromium forms the nonimage areas and is etched away to bare the copper in the image areas. If grained plates are desired, the base metal sheet is grained before the other metals are plated on it. The films of these metals are so thin that they have little effect on the grain.

Digital-direct plates. The digital-direct plate workflow is usually referred to as direct-to-plate or computer-to-plate(CTP) technology. The prepress workflow requires that imposition and proofing are done digitally, eliminating the need for film, stripping, and filmbased proofing.

Digital-direct plates are imaged in a platesetter (Figure 2-27),directly from digital data sent from the computer workstation. Lasers, UV light, or light-emitting diodes (LEDs) may be used to make the exposure. Inkjet technology may also be used to image the plate. With this technology, an inkjet forms the image areas on the plate to form a mask. The plate is then exposed, and the inkjet mask is dissolved and removed during processing.

There are three basic types of platesetter: internal drum (Figure 2-28), external drum, and flatbed. Internal drum platesetters require the plate to be inserted within a drum. The drum stavs stationary while a rotating mirror moving through the center of the drum on a worm gear guides the laser beam to the plate. With external drum platesetters, plates are loaded around the outside of the drum. While the drum spins. a head with multiple lasers moves from one side of the plate to the other, exposing the plate. Plates are positioned flat on a bed with flatbed platesetters. One type of flatbed platesetter employs the use of two LCD panels mounted on separate carriages. A UV light exposes the plate through the LCD panels, which can move over just the image areas of the plate, reducing time required to expose plates that have light areas of coverage. 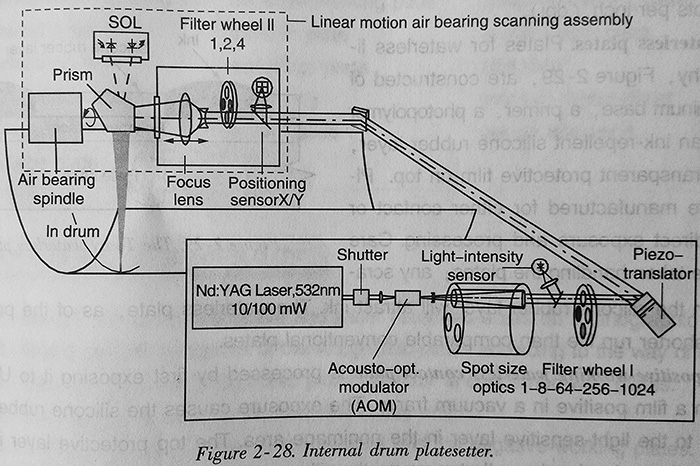 Plates for use in a platesetter may be coated with various materials, including a silver-halide emulsion, diazo, and photopolymer. Light-sensitive plates are exposed by the light of the exposing device (laser, UV light, or LED), while thermal plates are exposed by the heat created by the laser. Some types of digital-direct plates are preheated (prebaked) before exposure and/or post-heated (baked) after exposure. This step in processing serves to harden the ink-receptive layer of the plate, extending the run length.

Plates can also be imaged directly on the printing press. In the original Presstek technology used with the Heidelberg GTO-DL in 1991,a specially designed plate was imaged on the plate cylinder using a spark-discharge plate-imaging process. This plate had three layers: a silicone surface, an aluminum ground plane, and a 7-mil polyester base. The imaging head, consisting of an array of sixteen tungsten-needle electrodes, generated sparks that removed the silicone surface and the aluminum ground plane in the image areas. The exposed polyester base attracted ink, while the silicone surface repelled ink, thereby, making it a waterless system. The resolution of theis imaging technology was 1016 dots per inch (dpi).

Waterless plates. Plates for waterless lithography, Figure 2-29, are constructed of an aluminum base, a primer, a photopolymer layer, an ink-repellent silicone rubber layer, and a transparent protective film on top. Plates are manufactured for either contact or digital -direct exposure and processing. Care must be taken handling the plates; any scratches in the silicone rubber layer will attract ink. The waterless plate, as of the present, has a shorter run life than comparable conventional plates.

A positive-working waterless contact plate is processed by first exposing it to UV light through a film positive in a vacuum frame. The exposure causes the silicone rubber layer to bind to the light-sensitive layer in the nonimage area. The top protective layer is then peeled off, and a developer that removes the silicone rubber layer from the light-sensitive layer in the image areas is applied to the plate surface.

Digital-direct waterless plates are imaged by thermal ablative technology. which is processless and also may be performed directly on press. The energy from the laser removes (ablates) the ink-repelling silicone layer of the plate, unveiling the oleophilic photopolymer layer. Because the ablation leaves burrs (specks of the removed silicone layer) on the plate surface, a bruch/vacuum must be incorporated into the platesetter to clean the surface before use.

Waterless plates can be used for high-quality commercial printing on both web and sheetfed presses and tend to print with a minimal amout of dot gain. Waterless plates are said to print sharp and be capable of high screen rulings in the 200~600 lines-per-inch (lpi) range.