Signatures. A complete sheet containing all the artwork for a cylinder is called a signature. By examining or taking apart a magazine or book, it is often possible to see how it was assembled from individual signatures. A folded signature, depending upon cutting and slitting, can come from the folder with tow sides open or three sides open.

Ribbons. When the printed web emerges from the last print unit, a slitter can be used to divide the web into two or more parallel ribbons. These ribbons continue into folders where they are folded and recombined in various ways.

Angle bars, Angle bars change the orientation of a web or ribbon by turning it at a 90 degree angle, Angle bars, singly or in succession, are used to re-orient a web for additional folding, turn a web over for reverse direction processing, or to superimpose a group of ribbons to obtain desired pagination.

Cylinder Impositions. The layout of pages on a publication cylinder must exactly match the configuration of the folder if every signature is to have its pages in the correct sequence and orientation in the finished product. Various cylinder layouts are possible, depending upon the folder type, page size and page count, the width of the press, and the final trimmed page size ordered by the customer. In a one-up imposition, the cylinder is laid out width one set of unique pages. A two-up cylinder repeats a page layout twice around the circumference of the cylinder. The term "pages around" refers to the number of pages that will fit around the circumference of the cylinder, but does not suggest repeats. Thus, a "four around" cylinder may have a "one up," "two up," or "four up" imposition.

Pages may be laid out on the cylinder in columns around format, with the head or foot (top or bottom of the page) leading in tine direction of cylinder rotation. The alternate layout is columns across the cylinder. In this case, the pages are turned 90degrees and the open side of the book leads. This may also be called low or high lead edge, according to whether the lower page numbers or higher page numbers are the lead edge of the cylinder. "Columns around" produces pages with a grain long orientation, "columns across" with a grain short orientation.

Former folders. A former folder folds a moving web or ribbon in the grain direction of the paper, i.e., parallel to the web path. The folding mechanism is V-shaped and the fold occurs as the web travels over the former board. Tension and friction are carefully controlled during folding through pinch rollers for tension and use of low pressure air to limit contact of paper with angle bars and rollers. The already-folded product may be folded again by another former. The folded product then leaves the folder and enters a cutoff section where it is cut into separate signatures.

Combination folders. A combination folder is capable of a wide variety of folds in the direction of web travel. The second fold is at a right angle, Additional folds may follow before the web or ribbon leaves the folder and enters the delivery section.

Upper versus lowers. In publication gravure presses, there are typically two folder sections. The upper folder typically slits the web into ribbons, then uses angle bars to superimpose (gather) the ribbons. Compensating rollers are used to positon the ribbons so they attain correct page-to-page sequential register when entering the lower folder, Upper folders are available with other configurations and additional features, such as formers and add-a-card units. Formers are generally used when the press produces newspaper-type products, or to reduce the number of ribbons on other products.

Single-width lower folders are designed to receive one stream of ribbons, the same width as the signature to be produced.

Double-width lower folders are designed to produce two signatures side by side on the same delivery. If the incoming ribbon is two copies wide, it can be slit by a slitter installed at the lower floder entrance.

Jaw folders. Jaw folders receive a set (or sets) of cut ribbons onto a cylinder. The fold is created by a tucking blade at the center, pushing the ribbons away from the cylinder into mating jaws on an adjacent cylinder. These jaws close, folding the signature and then transferring it by the folded edge for further processing.

The ribbons entering a jaw folder warp around the cylinder with pages in a staggered order so that successive pages lie correctly over one another. The jaw folder is versatile and can deliver a greater number of signatures and page combinations than a former folder.

A schematic of jaw folder operation is shown in Figure 4-5. 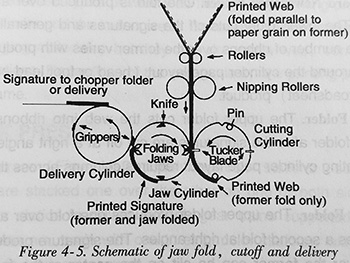 Chopper folders. In chopper folders, combined ribbons are run over formers. The ribbons are cut across the direction of web travel. The folder may separate (or divert) the folded signatures from different positions around the gravure print cylinder, and deliver these signatures separately to the chopper folder. The folder mechanism is a reciprocating blade chopping the center of the signature down between a pair of spring-loaded rollers, thus creating a fold.

Ribbon compensators. A ribbon compensator is a movable roller in a folder which allows the press operator to move ribbons individually in relation to each other in the direction of web travel. This permits ribbons to be aligned with the correct page-to-page register.

Slitters. Slitters are rotary knives which cut a web into ribbons, forming separate streams for folding and delivery. Slitters are precision instruments which must be sharpened and adjusted to very tight tolerances.

Cutting cylinders. Cutting cylinders are a pair of cylinders containing knives and cutting rubbers, capable of cutting through multiple ribbons of paper. Facing the male knife cylinder is a female cutting cylinder, with slots in the rubber strips corresponding to the male blade positions.