The thickness of the ink film on the rollers is a very important consideration in printing. Typical ink film thickness on a lithographic press is 0.2~0.4 mils (0.0002~0.0004 in., or 0.005~0.010 mm), depending on the ink color and printing sequence. The press operator should control the amount of ink being carried by the inking system for more precise control of ink density and color and to avoid problems related to excessively thick or thin ink films.

Common problems resulting from an excessively thick film of ink are increased ink consumption, ink setoff, drying problem, slight degradation of light colors, graininess of print due to irregular dot gain, excessive emulsification of ink, and low contrast in the shadows due to dot gain.

Print contrast is a mean of determining optimum inking levels during the pressrun. Print contrast is calculated from a solid ink patch and a 75% tint patch, according to the following formula: 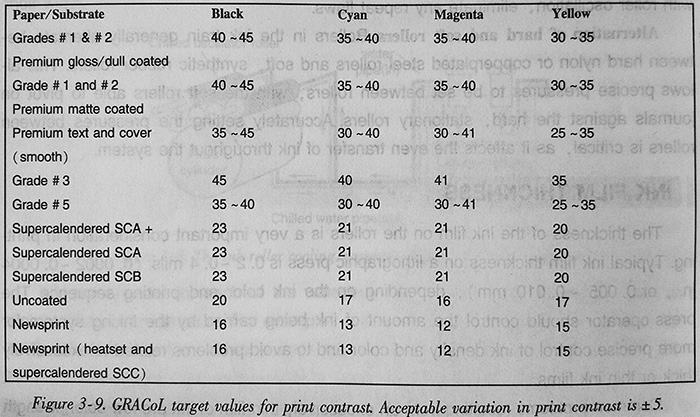