Ink manufacturing (Figure 5-10) is complex and requires extensive chemical and printing process knowledge as well as specialized ink manufacturing equipment use. While there a number of manufacturing methods, most share these basic phases of production: formulating, premixing, milling, filtration, and testing.

Formulating  Since formulation of inks is the ink manufacturer's responsibility, the subject is presented only briefly here. A typical sheetfed ink contains the following materials:

These standard inks dry primarily by polymerization, a chemical reaction that is initiated by oxygen and catalyzed by cobalt and manganese lons from the drier.

The formulation of inks involves the selection and proportioning of ingredients. These decisions are made in accordance with the intended use of the ink. However, there are some general categories of ingredients that are common to most lithographic inks, including pigments, vehicles, additives, and drying agents (driers).

Premixing  Premixing is particularly important when inks are made from dry pigments. The dry pigment is formed of large clumps of particles called aggregates or agglomerates. These aggregates must be broken down and reduced in size as the pigment is wet with the vehicle. The initial dispersion involves premixing the dry pigment with the vehicle using a mechanism consisting of rotating mixing blades. This process thoroughly wets the dry pigment. The second stage of premixing involves adding more oil and resin to form a "mill base", Figure 5-11. 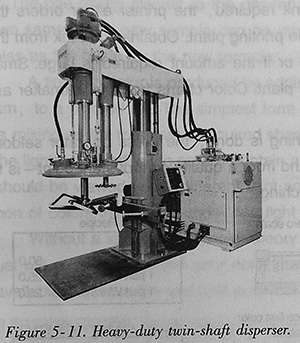 Unlike dry pigments, flush pigments are predispersed in the vehicle and therefore require less rigorous premixing. Inks made from flush pigments may go directly to milling after mixing the primary ingredients.

Milling  The mill base still contains large agglomerates that must be further broken down. Also, the addition of other ingredients like waxes and driers can be done at this stage. In many cases, this done in a shot mill, which is made up of a chamber, rotating disks, and shot pellets. The ink is forced into the chamber and the rotating disks move the metal pellets through the ink, breaking the pigment down.

Another device used for milling is the three-roll mil, Figure 5-12, which shears the ink as it passes between the rolls, which rotate at different speeds. This shearing breaks up the pigment agglomerates into microscopic particles so that each becomes completely surrounded and wet by the varnish. Milling also "classifies" the pigment, permitting finely dispersed pigment to flow through the mill and retaining or holding back coarser pigment particles. The ground ink is taken off hte high-speed roll by a doctor blade. A thorough job of grinding may require as many as three passes through the mill, depending on whether the pigment is soft or hard and how easily it is wet by the varnish (Figure 5-13). 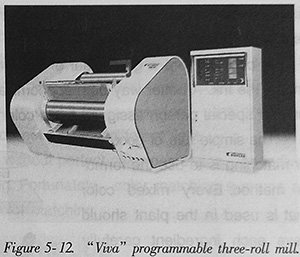 Milling is costly, and inks can be made less expensive by reducing the amount of milling. This, however, causes several problems including reduced color strength and coarser pigment. Large pigment particles in the ink may cause premature plate wear and scratches in the plate. Since the pigment is the most expensive part of the ink, and uniform dispersion is accomplished by extensive milling, high-quality inks cost more.

Filtration  After milling, ink may be put through a series of filtration steps to remove any oversized particles. The filtration system consists of bag filters that have decreasing pore sizes, from 150 microns down to microns. In some cases (particularly when manufacturing inks from dry pigments), an electromagnetic filter is used as a part of the filtration system to eliminate metal fragments.

Testing  The finished ink can be tested for a wide variety of properties. Those particularly, tack, fineness of grind (pigment particle size), and water pickup (emulsification rate). Once the product is assured of meeting requirements, the ink is packaged for shipping.