The most aggravating problems in lithography are often interaction problems, which arise when there is more than one deficiency among the paper, ink, press, and press operation factors. Consequently, adjusting the press may solve the problem temporarily, only to have it recur later or to have it pop up as a "different" problem. 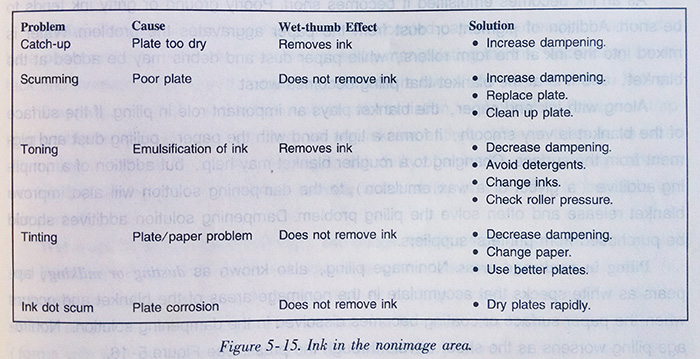 Dot growth, slur, and doubling increase the area of paper that is printed and, in the printing of process colors, change the color of the print. Except for dot growth resulting from applying too much ink or ink that is too soft, these are not normally considered to be ink problems.

catch-up, tinting, toning, and scumming are ink/plate/dampening problems that are often correctable on the press. Catch-up, or dry-up, is the name applied to ink appearing in the nonimage area because of either (1) insufficient dampening of the printing plate or (2) an excessively thick ink film compared to the dampening level. Tinting or toning results from ink emulsified in the fountain solution, while scumming is a permanent image-usually spots-in the nonimage area. To distinguish toning, scumming, and catchup, the wet-thumb best is useful. To perform the wet-thumb test, the press operator puts the press on safe, inserts a finger in dampening solution, and then rubs it across the nonimage area of the plate and observes how the ink behaves.

scumming can arise from a number of sources, including the ink. Several possible causes can occur simultaneously. Scumming can be caused by film and film processing, plates and plate processing, dampening solution, lighting, press adjustment, paper, or ink.

Ink can cause scumming for several reasons. Addition of oleic acid to ink can create a scummy plate. Uncontrolled or unexpected changes in the pigment or the resin treatment can also cause printing problems. Improper grinding that leaves grit in the ink will accelerate wear of the plate and result in scumming and or plate blinding.

Piling in image areas. Piling is the accumulation of ink pigment or coating from the paper onto the blanket or plate. The major cause of image area piling is the shortness of ink caused by emulsification with water and dilution with dust, pigment, or other debris from the paper.

As an ink becomes emulsified it becomes short. Poorly ground or gritty ink tends to be short. Addition of pigment or dust from the paper aggravates the problem. Water is mixed into the ink at the form rollers, while paper dust and debris may be added at the blanket, and it is at the blanket that piling becomes worst.

Along with ink and paper, the blanket plays an important role in piling. If the surface of the blanket is very smooth, it forms a tight bond with the paper, pulling dust and pigment from the surface. Changing to a rougher blanket may help, but addition of a nonpiling additive (a glycol or wax emulsion) to the dampening solution will also improve blanket release and often solve the piling problem. Dampening solution additives should be purchased from printers' suppliers. 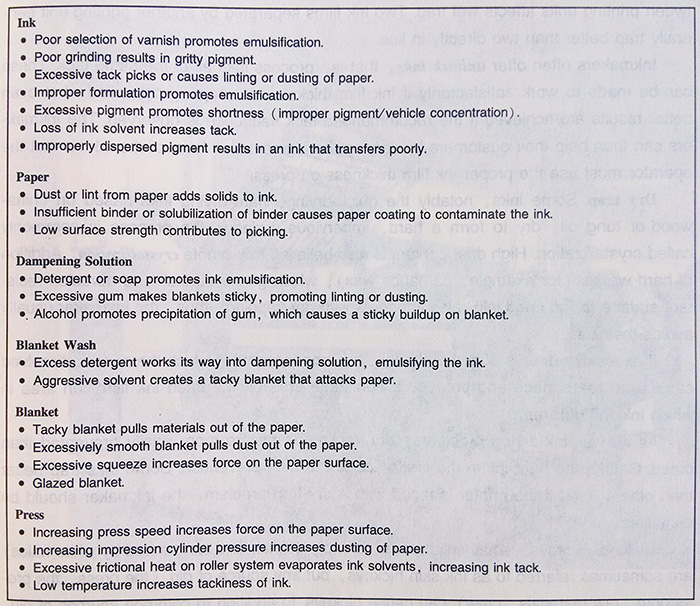 Trapping. Variations in trapping result in color variation in lithography. Causes of trapping problems when attempting to trap on wet ink are entirely different than those when attempting to trap on dry ink. Wet trapping is the ability of a wet ink film to accept another wet ink film printed over it, while dry trapping is the ability of a dry film to accept a wet film printed over it.

Wet trap. To assure good wet trap, two things must be kept under control: ink tack and ink film thickness. PIA/GATF has always recommended that inks vary by one or two tack units on multiunit presses. A thin ink film will not trap properly over a thick ink film, so that even if ink tack is properly controlled, ink film thickness must still be controlled (forms with light ink coverage should be run before heavy forms, and the color strength of the ink must be controlled). The little amount of time that an ink sets on a sheet between printing units affects wet trap. Two ink films separated by another printing unit generally trap better than two directly in line.

Inkmakers often offer unitack inks, that is, process inks all of the same tack. These can be made to work satisfactorily if ink film thickness is properly controlled, but even better results are achieved if the recommended tack sequence is observed. The inkmakers can then help their customers by varying the pigmentation level of the ink so that the operator must use the proper ink film thickness on press.

Dry trap. Some inks, notably the quick-drying, hard-drying inks based on china-wood or tung oil, dry to form a hard, impervious surface; the process is commonly called crystallization. High drier content is also believed to promote crystallization. Addition of hard waxes (example, carnauba wax), which give a scratch-and abrasion-resistant surface to the dried ink, also interferes with dry trapping; thus, the inkmaker usually avoids their use.

if excessive frier is added to the ink, the nondrying oil nondrying oil in which the drier is dissolved can rise to the surface and produce a nonimage area on the dried ink film, an area in which ink will not trap.

As with all ink-drying problems, dry-trap problems are more easily prevented than cured. Getting the right ink in the first place is the best prevention. Some inks trap better than others, and if the printer is faced with a dry-trap problem, the inkmaker should be consulted.

Hickeys. Hickeys (small solid areas, sharply defined and surrounded by white halos) are sometimes referred to as ink skin hickeys, but any source of dirt (the press, the pressroom, raw materials, crew) can cause hickeys. In addition to common sources of dirt, there many unusual sources, and the solution to a hickey problem often involves a careful, lengthy search. Paint, spray powder, and other materials falling from the ceiling frequently cause hickeys.

In general, the heavier the paper, the greater the variation in absorbency. Mottle is seldom found on uncoated book paper, only occasionally on cover stock, and frequently on carton board.

Variations in binder migration in paper coatings sometimes create mottle on coated papers. Like the ink, the binder detects differences in paper formation or absorbency and exaggerates small differences in the base stock.