The most common sheetfed perfecting press is called a convertible perfector, Figure 3-5. Special reversing cylinders tumble the paper end-for-end between printing units so that the other side of the sheet is printed by the second unit. By adjusting the reversing cylinder, a two-color convertible perfector, for example, has the capability to print either two colors on one side of the sheet or one color on each side in a single pass through the press. In other words, the press can print either "2/0" (read as "two over zero") or "1/1" (read as "one over one"). Most perfecting presses are available with four or more printing units. For example, a six-color (or six-unit) perfector would be able to print either "6/0" (six over zero) or "4/2" (four over two). Various color combinations are possible based on the number of printing units and the physical location of the perfecting cylinder. 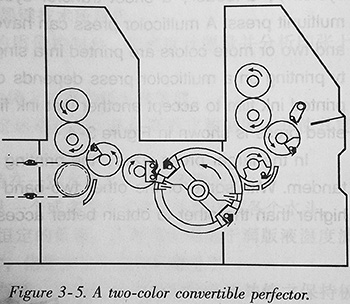 Withe another type of sheetfed perfecting press that is used infrequently, the blankets from two printing units are in contact, with the paper passing between the two blankets. This type of press is called a blanket-to-blanket press, because the two blankets are in contact. No impression cylinder is needed; each blanket acts as the impression cylinder for the other. (Most web offset presses print blanket-to-blanket.)