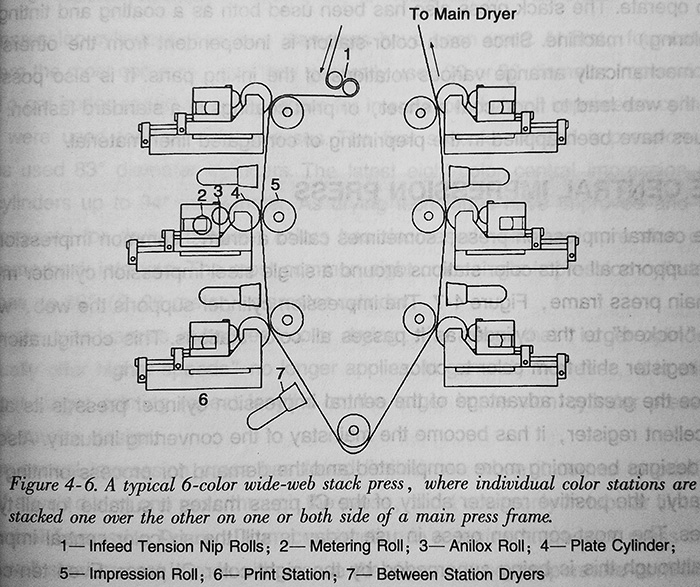 stack presses have three main advantages first, the operator can usually reverse the web to allow both sides to be printed during one pass through the press. Various web-threading arrangements allow complete ink drying before the reverse side is printed, provided enough drying capacity is designed into the area where the web passes between the series of stations. The second advantage is the color-station accessibility, which facilitates changeover, wash-up, etc. The third advantage is the ability to print large repeats.

The stack press has proved useful in many applications and has been used to print on almost every type of substrate. It does have limitations that don't make it completely acceptable for some applications. When printing substrates that are extensible or of extremely thin gauges, the stack press is generally restricted to color registrations that do not require greater accuracy than ±0.0312". When heavier gauge materials are being printed, such as papers, laminated film structures and others that can tolerate fairly high web tension values, the stack press can profitably produce commercially acceptable registered products.

The stack press lends itself well to applications such as printing in-line with other types of machinery. There add-ons may include extruders, bag machines, sheeters, laminators or other equipment.

With some special color-station designs, it's possible to have 360° register on each station and independent engaging and disengaging to allow the remaining part of the machine to operate. The stack press also has been used both as a coating and tinting (allover coloring) machine. Since each color-station is independent from the others, it is easy to mechanically arrange various rotations of the inking parts. It is also possible to change the web lead to flood coat a sheet, or print coatings in a standard fashion. These techniques have been applied in the preprinting of corrugated liner material.