Self-covers are produced from the same material as the body of the book and generally carry part of the message of the piece. Newspaper and some news magazines have selfcovers. The method requires no special techniques to assemble or attach the cover to the body of the work. The process is generally restricted to the less expensive binding techniques, such as wire side or saddle fastening.

Soft covers are made from paper or paper fiber material with greater substance than that used for the body of the book. Soft covers carry part of the message of the piece. They are intended to attract attention and to provide slight, temporary protection. Paperback books are one example of their use. Soft covers can be glued in place, as with perfect binding, or can be attached by stitching or sewing. The covers are generally cut flush with the pages the book.

A casebound cover is rigid cover is generally associated with high-quality book-binding. The covers are produced separately from the rest of the book and are formed from a thick fiber board glued to leather, cloth, or some form of moisture-resistant impregnated paper. A casebound cover extends over the edge of the body of the book by perhaps 1/8 inch (0.32cm). This "turn-in" provides additional protection for the closed pages.

In order to casebind a book, several operations, called forwarding, are necessary. First, the signatures are trimmed, generally by using a three-knife device that cuts the three open sides in single motion. The back or fastened edge of the book is then rounded. Rounding gives the book an attractive appearance and keeps the pages within the turn-in of the cover. Backing is accomplished by clamping the rounded book in place and mushrooming-out the fastened edges of signatures. The purpose of backing is to make the rounding operation permanent and to provide a ridge for the casebound cover. Next the book goes through a "lining-up" process, which consists of gluing a layer of gauze (called "crash") and strips of paper (called "backing paper") to the backed edge. The crash and backing paper are later glued to the case and provide additional support for the book. A headband is a decorative tape that can be attached to the head and tail of the back of the book to give a pleasing appearance. This is not always done. All forwarding can be completed on automatic equipment.

The actual case is made from two pieces of thick binder's board glued to the covering cloth. The cloth can be printed before gluing to the board or after by such processes as relief hot stamping or screen printing. The binder's board is cut so that the piece will extend over the body of the book by at least 1/8 inch (0.32cm) on each open edge and will miss the backed ridge by the same distance. The cloth is cut large enough so that it will completely cover one side of both boards and will extend around the edges by at least 1/2 inch (1.27cm). The positions of the two boards on the cloth are critical and must be carefully controlled. Automatic equipment exists that cuts both the board and the cloth and joins the two pieces in their proper positions.

The final process of joining the forwarded book with the case is called casing in. The two are attached by two sheets called end sheets. End sheets can be the outside leaves of the first and last signatures or can be special pieces that were joined to the pages during the assembling and fastening operations.

To case in a book, the end sheets are coated with glue, the case is positioned in place, and pressure is applied. The pressure must be maintained until the adhesive is dry. This was traditionally accomplished by stacking the books between special "building-in" boards (Figure 6-15). This technique has been gradually replaced by special heat-setting adhesives that dry in a matter of seconds as the end sheets contact the case. 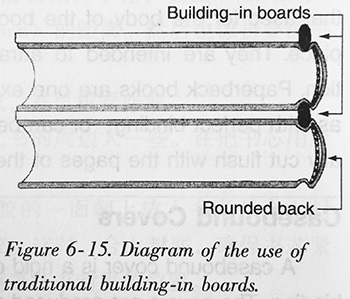 When the book is complete, it can be jacketed (put in a protective paper cover) or boxed and delivered to the customer. Equipment exists that automatically case binds books from the forwarding operations to the final steps of sealing and labeling the cases used to ship the final product.

Cover design is inhibited in many ways. When a book is to be rebound, its nature, and its period-wherever this may lie in the five centuries over which the craft extend-smust be considered. So, too, must the wishes of the owner, though they may conflict with the better judgment of the binder; for even a craftsman of national repute seldom feels able to refuse a valuable commission.

Only when the designer bookbinder has complete freedom of expression can this design be truly personal.

With older books, traditions of design should be respected; mere copying is not suggested, but the design should be in keeping with the book and sympathetic to its period; anything quite out of period is unacceptable.

Until the earlier part the twentieth century, hand-tooled book cover design was purely decorative and unrelated to the book's contents, finishing tools were made in almost completely standard patterns, and their very nature generally restricted decoration to geometric arrangement, although occasionally with considerable individuality. One thing was constant; the design was inevitably framed, often by a border round it, and always by the edges of the board. Today no such restraint exists, and designs often extend over the whole cover -- and even beyond; for much is left to the imagination.

Decorative patterns consisting of geometric arrangements of lines, gouges and smaller unit tools, that are too intricate to be tooled directly on the leather, must have working patterns prepared. Strong, thin bank paper is cut to the exact size of the board and the tools are impressed in black, after the face of each has been held in the tip of a candle flame, which leaves a deposit of carbon on it. It is sometimes convenient to divide the board surface into equal geometric parts by first folding the paper lengthwise and across the width, creasing it, and lightly penciling in the crease lines. Should a central symbol be envisaged, the second fold will have to be made at the centre band on the spine, which will give an optical centre. Further folds can be made from these to produce rectangular areas, or, if lozenge-shaped ones are required, can be made by drawing lines from the corners ofthe four rectangles already marked. By making lines that bisect the diagonals where they cross, the pattern paper is further divided. From these guide lines repeat patterns may be built according to the fancy of the finisher.

Carefully planned lettering can be very effective on the board of a full leather binding, either as a border round all four sides or as a centre-piece, possibly enhanced by the judicious use of simple units arranged round it to form a circle, oval, or other shape. Douglas Cockerell was supreme in the controlled and elegant use of intertwined lines and gouges with feaf and flower forms; above all else he used space to accentuate his pattern. Although every generation must have the freedom to express itself as it may, beauty, of whatever period, will always be a joy for ever.

"Expressive" is the term used in this second half of the twentieth century to describe bookbinding design that is no longer in bondage to yesterday. Like the artist, the designer-bookbinder uses abstract form, often with exciting effect. His designs not infrequently cover the whole book cover, and yet with each separate area, back and front board and spine, still individually complete in itself.