Finishing refers to several operations that may be performed on printed material after it has left the press. The most common finishing operations are cutting, folding, and gathering. other finishing techniques include scoring, perforating, drilling, embossing, and die cutting.

CUTTING  Cutting is done to make a large sheet of paper into several smaller sheets. Cutting should NOT be confused with trimming. Trimming refers to cutting off uneven edges of paper, as when trimming the three sides of a book. It makes the sheets smaller, square, and even with each other. 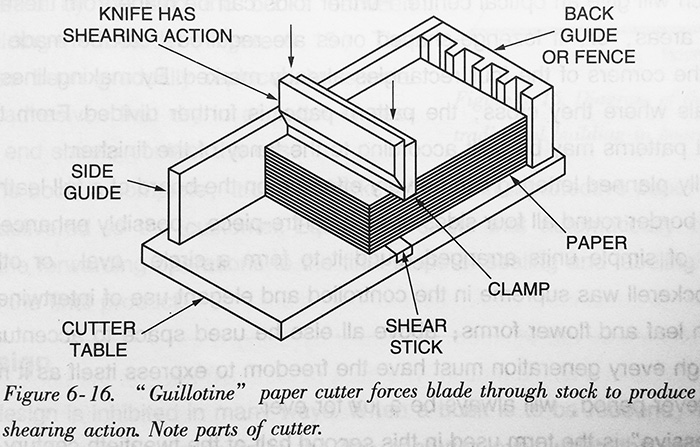 The blade must be very sharp. Any roughness of the blade will appear as a jagged edge on the sheet. Any irregularities are obviously very undesirable.

Keeping the blade in excellent condition is essential for quality trimming or cutting of stock. Most plants will send cutter blades out to be sharpened.

A typical guillotine cutter is shown in Figure 6-17. It is a large hydraulic, power-driven model. The size of a paper cutter is the maximum width of the paper it can cut. 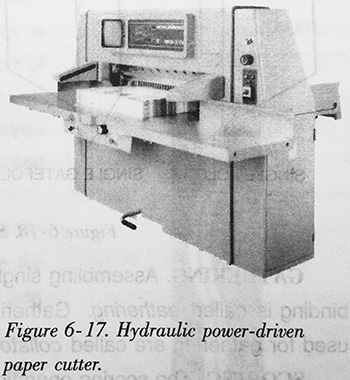 Operating a Paper Cutter  The operation of hand-operated and power-operated cutters is essentially the same.

Safety Notes. Secure permission before using the paper cutter. Only one person should operate this machine at a time. Keep both hands away from the blade and out of the blade path.

Begin by moving the back fence to obtain the desired depth of cut. The front handwheel is used to move the back fence. The distance between the blade and fence on most cutters is shown on a measuring tape or a scale built into the bed of the machine.

Jog (straighten) the paper and place it on the bed of the cutter. Set the paper pile against the back fence and along the left side of the paper cutter.

Modern machines require an operator to use both hands to activate the cutter blade. Some hand-lever cutters contain a safety pin which must be held with the left hand while the right hand pulls on the lever. Others require the operator to grasp the lever with two hands in order to activate the blade. Power cutters are equipped with dual controls that must be operated with both hands.

When the cut is complete, raise the blade. Check to be sure the blade is locked in its uppermost position. Then raise the paper clamp and remove the pile of paper. If the other dimension needs to be trimmed, turn the paper and repeat the above process.

Safety Note. Always adjust the paper clamp to its lowest position before you leave the cutter area. Be sure to turn off the power on hydraulic machines.

FOLDING. A small folding machine can fold a small sheet of paper such as a letter or brochure. Large, heavy-duty folders are capable of folding book and magazine signatures. A signature is a sheet of paper that has been folded a number of times, then trimmed with a paper cutter to form pages. Some common paper folds are shown in Figure 6-18.

GATHERING. Assembling single sheets of paper or signatures in sequence before binding is called gathering. Gathering may be done by hand or by machine. Machines used for gathering are called collators.

SCORING. The scoring operation is used to crease heavy paper or cardboard so that it can be easily and smoothly folded. A platen press can be used for this purpose. Lock a piece of steel scoring rule in the chase. Scoring rule has a rounded face and is type high.

Place the in the press and remove the ink rollers. Pack the platen and position the gage pins. Then feed the paper into the press as if it were being printed. Each sheet will be creased when the scoring rule strikes it.

Scoring can also be done by attaching scoring rollers to the delivery side of an offset duplicator, Figure 6-19. The rollers crease each sheet of paper as it is transferred from the printing unit to the delivery table. 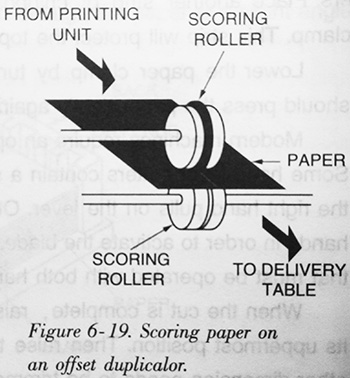 PERFORATING. Perforating is similar to scoring. The difference is that in perforating, a series of slits or holes are punched into the paper or cardstock to facilitate tearing. An offset duplicator can be used to perforate the sheet by a perforating wheel attached to the delivery end of the machine.

To perforate on a platen press, lock up a steel perforating rule in the chase. Remove the rollers to prevent the rule from cutting into them. Also protect the platen by covering it with a metal plate. Place a piece of tympan paper over this metal plate, and position the gage pins as required. Then feed the paper into the press as if it were being printed. Each sheet will be rule strikes it.

DRILLING. A drill is used for drilling round holes through paper. Several hundred sheets can be drilled at one time.

Paper drill bits come in various sizes and are hollow. As the bit cuts into the paper, round chips are fed up through the drill bit and into a waste compartment at the back of the machine. Loose-leaf pages are prepared in this way.

EMBOSSING. Embossing is generally done on a platen press. An embossing die is locked up in the bed of the press and a counter die of the embossed image is attached to the platen. When the paper is pressed between the embossing and counter dies, Figure 6-20, a raised or embossed image results on paper.

DIE CUTTING. Die cutting is cutting out various shapes in paper or cardboard. It includes punching regular and irregular shaped holes. Die cutting is usually done on a platen press.

A die consists of one or more pieces of steel cutting rule bent to form the desired shape. The die is set into a plywood saw kerf (cut) in the same shape. A band or jig saw can be used to make the cut. Several small pieces of sponge rubber or cork are then glued to the plywood base. These force the paper out of the die after it is cut. die used to cut a small box blank is shown in Figure 6-21. 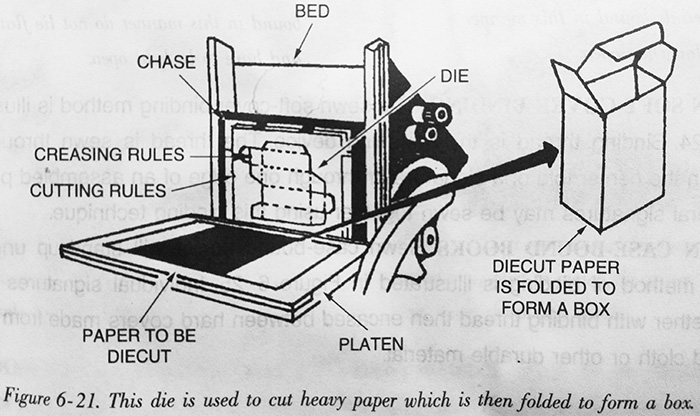