Solid ink film measurement. To maintain image quality during the pressrun, the operator is concerned with the ink film thickness being printed on the paper. When ink films are too thin, the images will appear to be washed out. When ink films are printed too thickly, many problems can result including poor drying, halftone plugging, and scumming or toning. The densitometer is used to provide numerical feedback on ink film thickness. These optical density readings are taken from solid color patches printed in the trim area of the form. Generally, the thicker the ink film, the higher the optical density reading. Published standards for the printing industry, like the General Requirements for Applications in Commercial Offset Lithography (GRACoL), specify density values and tolerances for solid ink film (Figure 3-11). 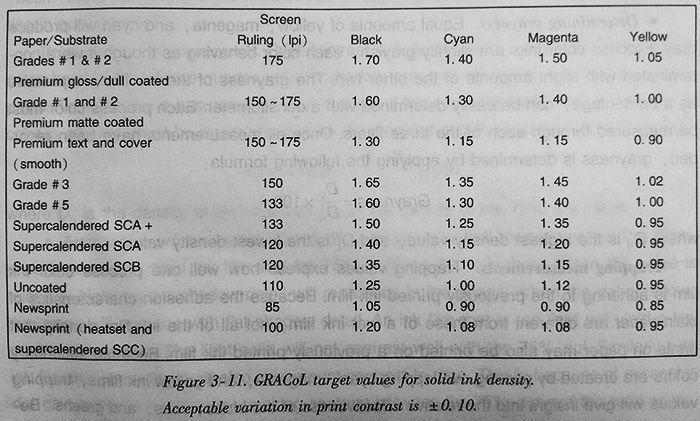 . Determining hue error. The process colors of yellow, magenta, and cyan are not completely pure. For example, a theoretically pure magenta would reflect only its own color and no cyan or yellow when measured with a densitometer. Because magenta is impure, it acts as though it is reflecting small amounts of yellow and cyan. Hue error, expressed as a percentage, describes the deviation of the process color from a pure state. For example, a magenta ink film might have a hue error of 40%, while a yellow might have a hue error of 3%. These values indicate that yellow is the purer of the two colors and that magenta has a higher hue error. To measure hue error, each process color is measured with the densitometer through each of the three filters: red, green, and blue. For example, when magenta is measured through a blue filter, the density reading shows how much yellow is reflecting from the magenta. When read through a red filter, the density of the cyan contamination in the magenta is determined. Once all readings have been taken, hue error values are determined by applying the following formula:

.Determining grayness. Equal amounts of yellow, magenta, and cyan will produce gray. Process color inks are slightly grayish, each color behaving as though it were contaminated with slight amounts of the other two. The grayness of the ink film, expressed as a percentage, can be easily determined with a densitometer. Each process color must be measured through each of the three filters. Once all measurements have been recorded, grayness is determined by applying the following formula:

Trapping measurements. Trapping values express how well one process color ink film is adhering to the previously printed ink film. Because the adhesion characteristics of plain paper are diffferent from those of a wet ink film, not all of the ink film density that prints on paper may also be printed on a previously printed ink film. Because secondary colors are created by printing overlapping cyan, magenta, and yellow ink films, trapping values will give insight into the relative effectiveness of the blues, reds, and greens. Before applying the trapping formula, each process color ink film and each secondary overlap color must be measured through each filter of the densitometer. Also, the order that the ink films were printed must be known.

. Interpreting trapping values. A trap of 100% is considered to be perfect. This means that the second ink film down is adhering with the same ink film thickness on the paper as ite is on previously printed ink film. Normally, this does not happen. Rather, typical trapping values range from 80%~90%, meaning that some adhesion is lost on the second color down. Very low values, like 60% trap, indicates that the secondary color is very weak and the colors in the printed image corresponding with that color will nto be rich.

. Factors affecting trap values. Trapping capacity is directly related to the tack of the ink (as well as other factors). Tack is a measure of the resistance of the ink film to splitting. The Inkometer is a device used to measure the tack of ink. When asked, ink manufacturers will provide the printer with tack values. When printing four colors of ink in sequence on a sheetfed press, the tack of the inks should be graded to yield good trap percentages. The first ink film printed should have the highest tack value, followed by successively lower tack values. This assures that the ink films will adhere well. If the second ink film down had a higher tack value than the first, the ink on the blanket would "stick" more effectively to the blanket than it would to the already printed ink film, resulting in poor transfer.

Dot gain. Dot percentages on the printing plate will grow when transferred to the printed sheet. This occurs because the pressure between the plate and blanket causese the ink film covering the dots on plate to spread outward. More spreading occurs as the dots are transferred to the paper. Dot gain, or tone value increase, is inherent in any printing process. Controlling the consistency and balance of dot gain for each ink color is more important than its actual value.

The densitometer is used to measure dot gain, usually from the 50% dot. The murray-Davies dot gain formula is as follows: