Densitometry, colorimetry, and spectrophotometry are the three methods used to measure color in the graphic arts. The densitometer measures optical density. It is essentially colorblind, measuring only the level of reflectance of the transmittance of a film. Density varies with ink film thickness, but data can also be used to determine dot area. Colorimeters define color numerically in various color spaces, but they do not measure density or dot area. Colorimeters are useful to determine color difference in an accurate metric called △E (delta E). Spectrophotometry yields the highest level of color in formation; it is the most accurate and versatile. Spectral analysis yields color curves and permits calculation of density, dot area, and colorimetry.

Of the three, the densitometer is the most widely used device in the pressroom for measuring and evaluating color testing and control images. Its primary use in the pressroom is to analyze test forms and color bars to determine how the press is performing and to monitor the pressrun, providing feedback on a number of factors including ink density, dot gain, trapping, and print contrast. The densitometer can also be used to inspect the quality of supplied off-press proofs and press proofs and determine their conformance to standards and specifications. It can also be used to analyze the incoming materials, such as ink and paper, used in the pressroom. An example of digital color transmission/reflection densitometer is shown in Figure 3-10. 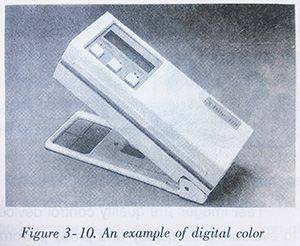 The densitometer provides an indication of printed ink film thickness by measuring the ink densities on color bars printed on the sheet. the ink patches to be read are spaced within each ink key zone of the printed sheet. The results are compared with desired densities, and a computer monitor displays the degree of variation. Ink fountain keys and fountain rollers can be then be adjusted if necessary. Scanning densitometers may also provide information on dot gain, print contrast, trapping, hue error, grayness, slurring, and doubling.